Do you know what Minecraft is? If so, do you understand its appeal? Frankly, I just roll with it. Long accustomed to my husband and son playing whatever is THE game of the moment, I didn’t think much when the idea of a Minecraft-themed birthday party was thrown out there.

I should’ve known better. Very little licensed birthday/decoration/party merchandise is currently available. I googled like a crazy woman and came up with nothing. Nada. Even Pinterest didn’t help much.

They’ve done this to me before, only with Mario. Long before you could walk into a party store and buy red hats with matching plates and napkins. But that’s ok, I’m up for the challenge, so I thought. For all those Minecraft moms out there, the least I could do is give you some more ideas and point you in the right direction.

First off was the invitations. This was to be a small party with only a handful of boys, as I was informed a server was involved so they could all play the PC version together on my dining room table. What? Server? Again, just roll with it…it’s easier. Bright side, I could think of some cool invites that I probably wouldn’t do in mass if 20 kids were invited. The fabulous site, Catch My Party to the rescue.

I used clear cupcake boxes from Bella Cupcake Couture, cut red licorice to size and wrapped with TNT label I created in Word. I did a search to find the top image of the TNT from the game to cut/glue onto the top.

Got my first big eyed ‘Wow’ from my son when I showed him the first box. ‘I must be on the right track’ was my thought. And of course, that’s what we all want is our children’s faces to light up…but it took a while later before I got another ‘Wow’.

We took down everything off our dining room wall and put up background paper that looked like bricks. I originally wanted stone but it was deemed by the gamers that the stone didn’t look like the game enough. We used painter’s tape (with a lot of patience) to paper the wall.

Every party needs a candy table, right? At least for Minecraft I felt like I could get away with a similar colors as the game and just label the jars/containers. I just printed images off of a basic search. But the table needed decorations. I found papercrafts on FPSX Games and started the process of printing, cutting, folding and gluing. These got the next ‘Wow’ out of my son.

The large characters weren’t so bad, I thought, so I started to print the cubes that (seem to) make up the entire game. Oh my. I was putting together cubes for what seemed like days. HA.

A Minecraft poster and some crepe paper on the wall and it started looking good. Thankfully my husband agreed it needed a little something more. I was just going to use more crepe paper (starting to hit my wall of decorating) but he stepped up and made some paper torches. PERFECT! One wall done. 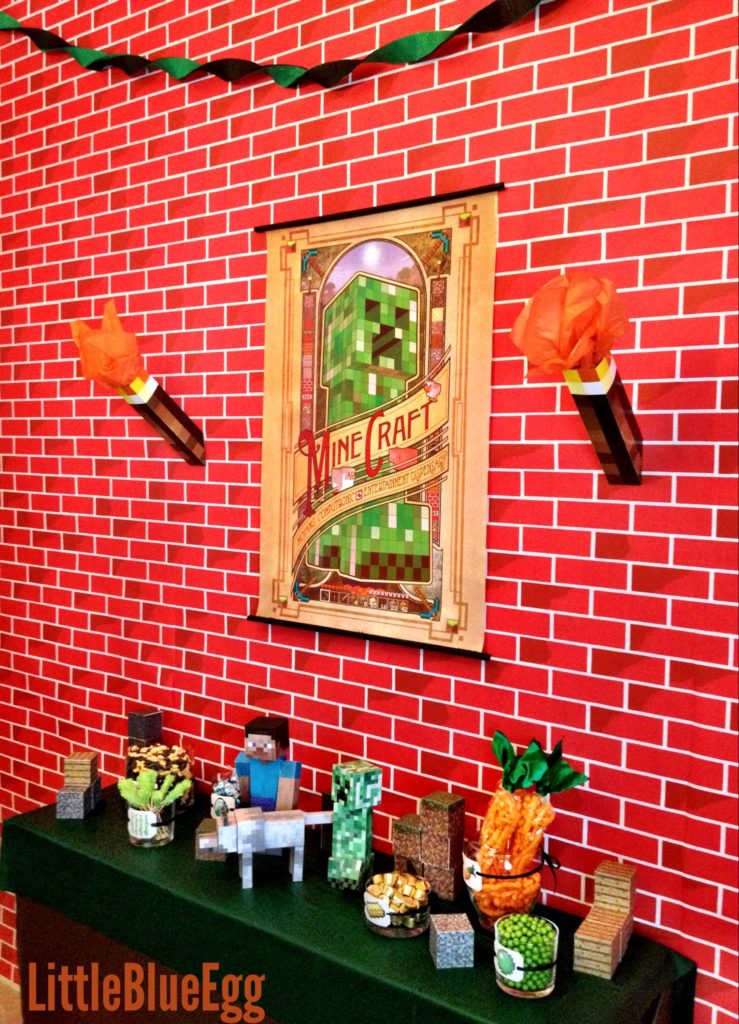 Got to have a cake for a birthday party. I mush prefer the easier (in my opinion) cupcakes but I learned there is a birthday cake in the game…guess we need to make it. Remember everything in the game is square.

One semi-square chocolate layered cake later and I’m thankful there are only a couple of boys coming that aren’t going to pull out their square ruler. Ah but I’m a cupcake maker, not a cake maker. The top of the cake wasn’t perfectly level. Oh well. A layer of fondant later and it looks good enough. Thanks to Anna and Blue Paperie for the Happy Birthday banner to print. 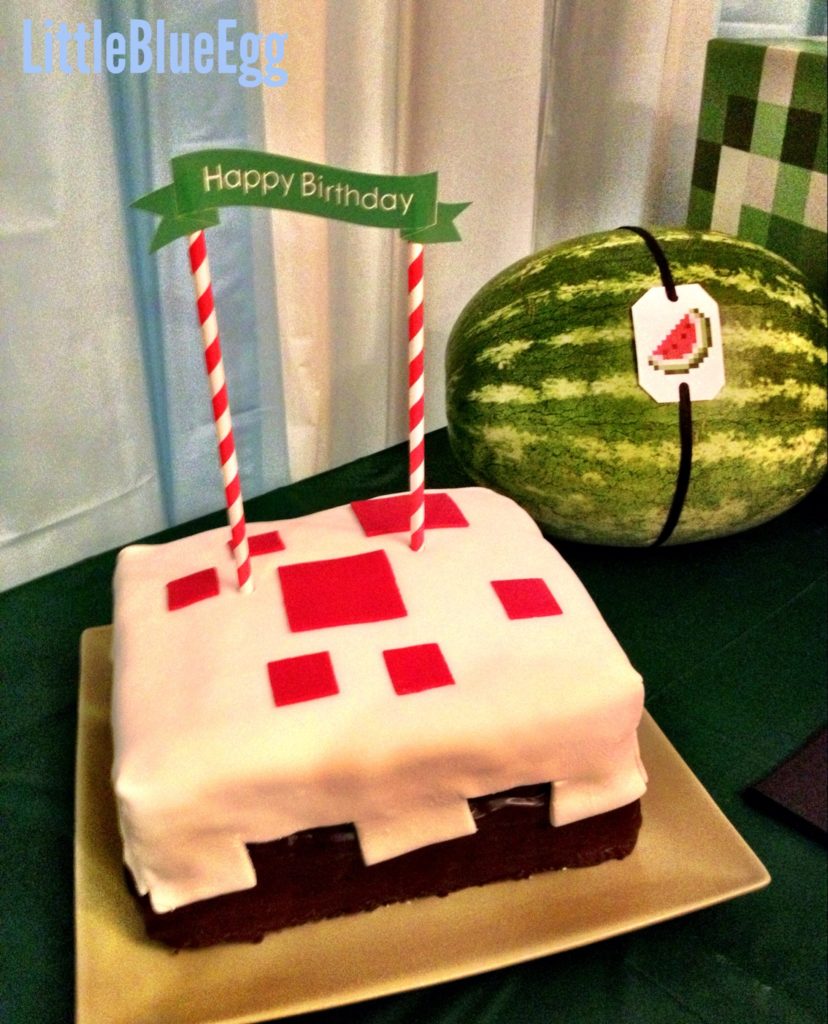 Of course the healthy apples and watermelon just ended up being decoration. 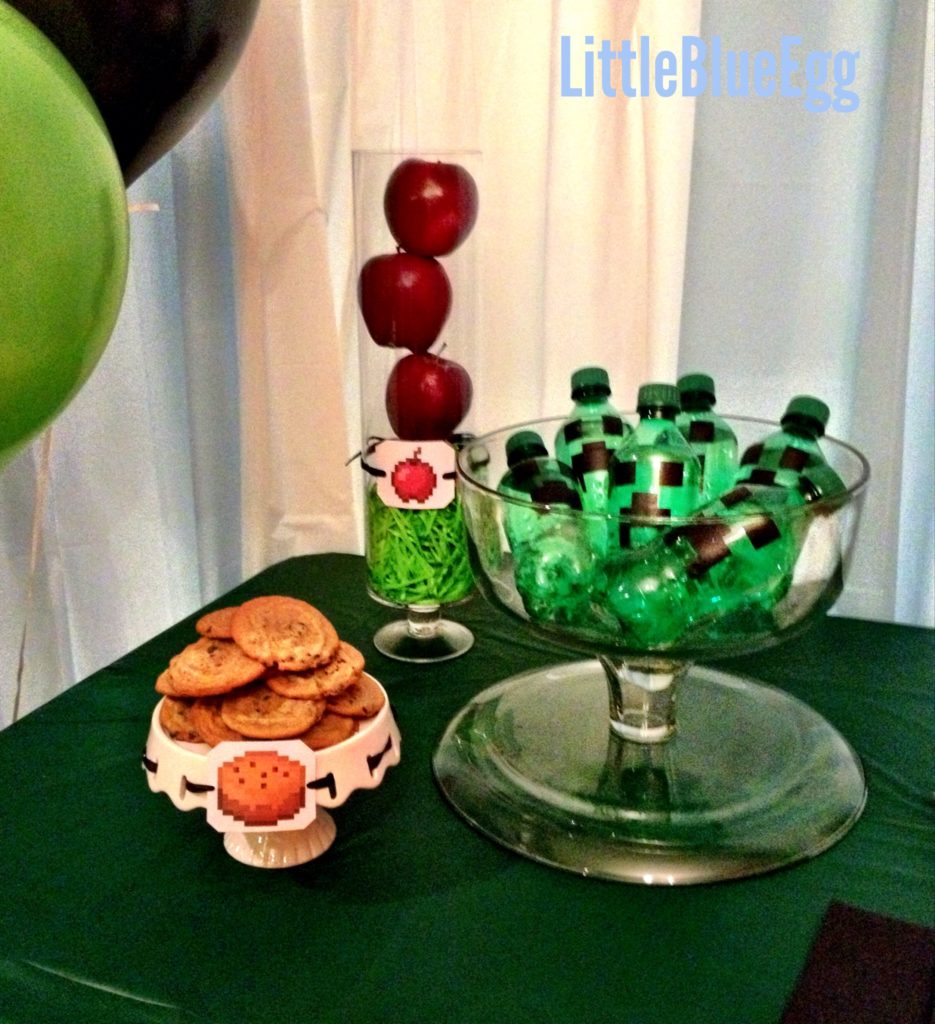 Best of all was the day of the party getting the ‘Wows’ from the boys as they realized they were playing the game inside of room looking like the game (success!). I wish all the other Minecraft mothers out there luck. Hopefully they’ll start licensing some party supplies soon. 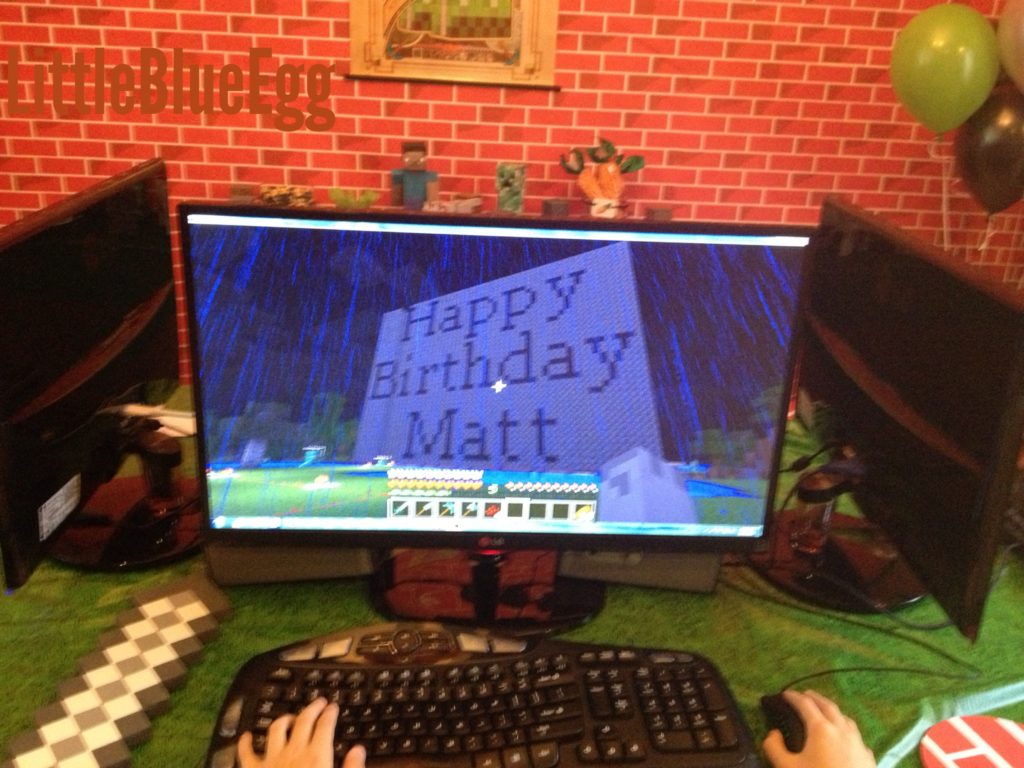